“13 Ways To Bleed On Stage” is the album in which their spider logo made its first appearance. 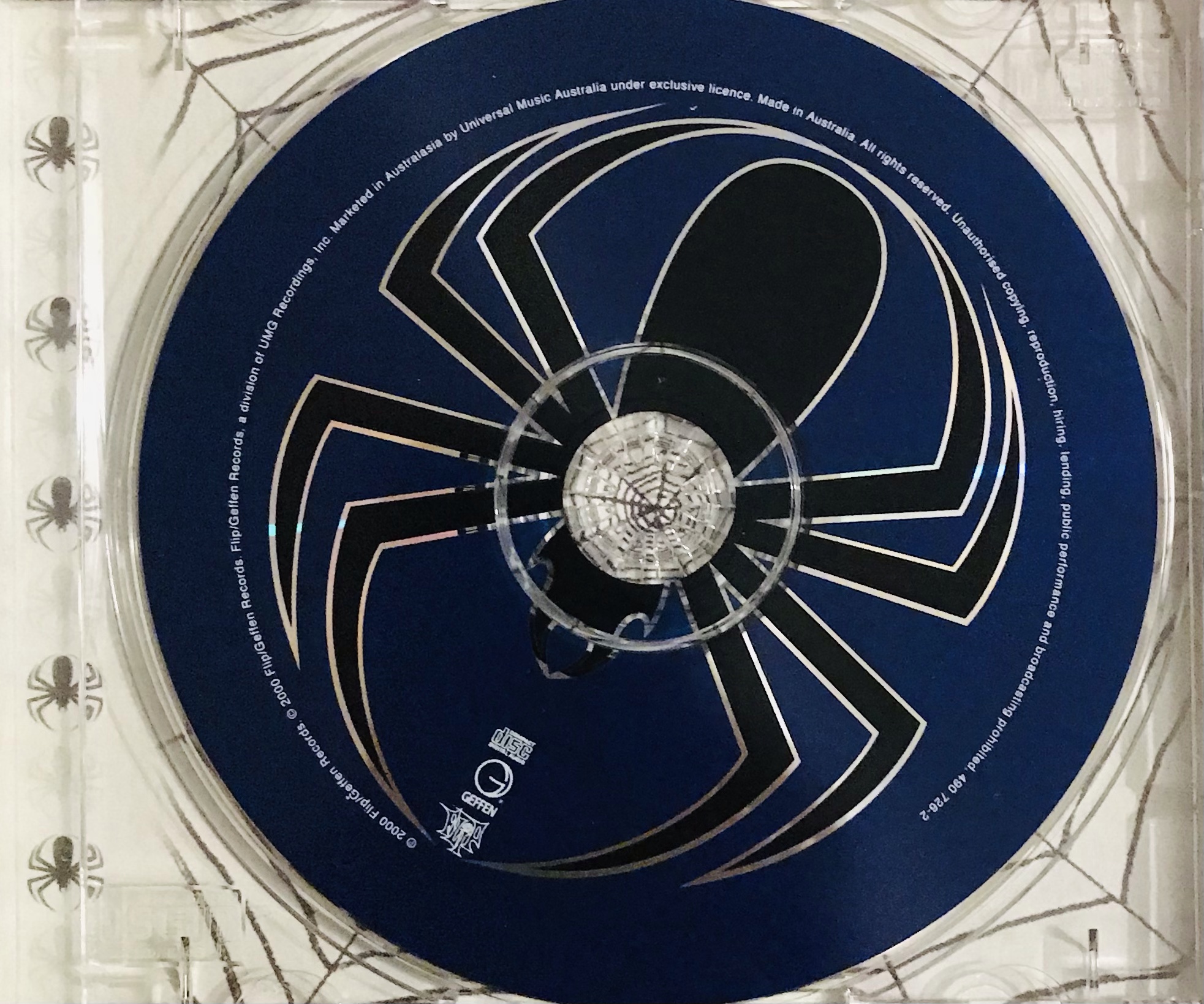 It was a bargain bin purchase in Australia even though it was a Gold selling album in the U.S.

I really liked the Staind/Bush vibe of the album.

Scooter Ward on vocals sounded a lot like em but I didn’t care.

“No One”, “End Of The World” and “Confession” stood out right away. Modern rock songs.

“It’s All Good” has a vocal melody in the verses which is catchy.

“Bleed” has an acoustic arpeggio riff that reminds me of “While My Guitar Gently Weeps”. As the album closer it is my favourite.

So I went down a rabbit hole listening to their catalogue on Spotify.

On a side note, guitarist Terry Balsamo would depart after the 2003 follow up “Year Of The Spider” to fill the vacant guitarist spot left by Ben Moody in Evanescence.

Three Crue members plus Randy Castillo, who was a very competent drummer in his own right, but he’s not Tommy Lee nor would he have had the same input and pull as Tommy Lee would have had on the Crue music.

Actually, Lee himself decided to not participate in the song writing for the “Saints of Los Angeles” album. Then again, if you just heard the two songs he dropped recently, maybe that’s a good thing. But as an artist, you need to have different outlets to explore different creative sides.

This version of Motley Crue and this album acts as a music bridge between the eras.

After the excellent self-titled Corabi led album, they brought Vince back and pushed the industrial sonics on “Generation Swine”. This didn’t sit well with a lot of their existing fans, and it didn’t gain them any new fans either. So Nikki Sixx, forever the marketing guru, knew that a return to hard rock would be on the cards.

“Seize The Day and living their life” is what the Pretty Maids (aka founding members Ronnie Atkins and Ken Hammer) did with this release and their brand of Euro Hard Rock.

“Violent Tribe” is on steroids while “Tortured Spirit” shows you can be heavy and melodic. “Poisoned Pleasures” and “Until It Dies” shows what a great songwriter and guitarist Ken Hammer is.

And track number 5, “Clay”, for a ballad which doesn’t get cheesy is a great track.

And the last three tracks, “They’re All Alike”, “Time Awaits For No One” and “Invisible Chains” makes you press repeat.

I picked this one up in a bargain bin, 3 for $20 and I was surprised by how good it was. But I didn’t get any of their other music afterwards.

I just did some reading on this album and was surprised to read how people called it a low-budget album (which it wasn’t, as Geffen financed it and had people like Adam Kasper who was doing Foo Fighter albums involved).

Basically if you are a fan of modern hard rock and alternative rock, then you will like this album.

Racer X is a band which was needed, so that all of its members could get a start and then go out and take over the world with different bands. You can call it an origin band. An origin story.

Paul Gilbert is now more famous for his Mr Big gig and his solo records and his instructional videos, plus his amazing list of guest appearances and tribute album appearances.

Drummer Scott Travis got the Judas Priest gig for the “Painkiller” album, then went to Fight with Rob Halford and he returned to Judas Priest for the “Jugulator” album in 1997 and has remained there since.

Vocalist Jeff Martin ended up as the drummer for Badlands for the “Voodoo Highway” album and since then he has done stints with Dokken and The Michael Schenker Group. Plus he had an excellent Judas Priest like band called “Surgical Steel” which appeared in a very underrated movie called “Thunder Alley” before “Racer X”. It definitely is a long way to that invisible line which symbolises the top.

Bassist Juan Alderete went into The Scream with guitarist Bruce Bouillet and after Corabi fled the coop for Motley Crue, he started working with others and ended up in “The Mars Volta”.

And it’s their best album by far with the stand out track being the title track and Paul Gilberts guitar prowess.

Check it out and you will know what I mean.

The cover is a Frank Frazetta painting so Molly Hatchett came to mind immediately.

When you get tracks with titles like “Molto Arpeggiosa” and “Instrumental Institution”, you know what you are gonna get. Malmsteen and the rockets in his fingertips, tap dancing on the fretboard.

And in “Bad Reputation”, Malmsteen gives his self-defence counter argument in the lyrics.

So if you like overdone guitar leads at the expense of other instruments and cheesy lyrics by Malmsteen, with a crap production, then you will like this album.

And I remember looking at the CD booklet at my cousin Mega’s place, with 20 or so photos of Malmsteen in various self-love poses, thinking, this must be a new record of artist shots for an album.

There are some good songs here, which are lost in the mush that “The Fury” created.

I would really like to hear songs like “Crucify” and “Bad Reputation” with a better production and mix like he had on “Odyssey” and “Marching Out”.

David Coverdale – Into The Light

What can an artist do after being in the game of making music for 26 plus years with Deep Purple, Whitesnake and Coverdale/Page?

What can an artist do in a musical climate dominated by Nu-Metal and Alternative Rock, which proved to be very hostile to the artists who had success in the 80’s, courtesy of MTV and their music videos?

When in doubt, you go back to the beginning, and to the blues.

If you want to read a review I agree with, check out the fantastic blog 2loud2oldmusic by clicking here.

So into the time machine I go and set course for 1985.