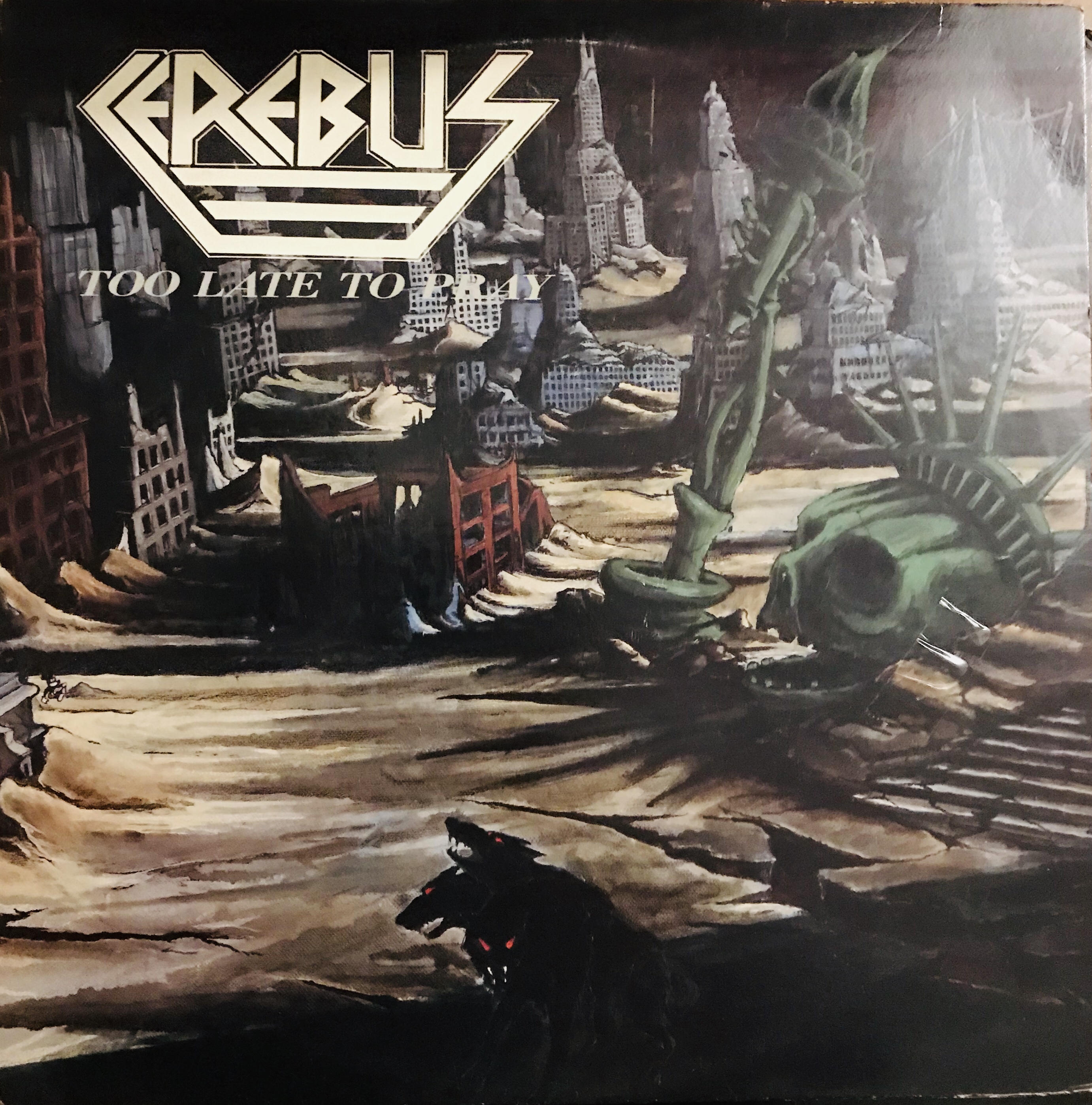 It was a random purchase at a record fair in the 90’s. The bin had a large sign that said 7 records for $10.

How could I refuse that offer?

The dystopian landscape cover painting got my attention, as its reminded me of various movies.

I dropped the needle and I was pleasantly surprised.

The raw production and the treble biased mix had me thinking of those Metallica albums. Which means that the bass player is hardly heard, which is a shame as Eric Burgess is the main songwriter in the band.

Cerebus is an American act. There is also a deathcore band with the same name that came out in the 2000’s who have nothing to do with this 80’s version.

They released a Demo in 1985, a full length album “Too Late To Pray” in 1986 on a label called New Renaissance Records, an EP in 1987 called “Like a Banshee On The Loose” on a local North Carolina label, another demo in 1988, another EP in 1991 called “Regression Progression” on a local label and a best of album in 2019 called “From Beyond The Vault Door” on a label called “Heaven And Hell”.

And their label “New Renaissance Records” was created by Ann Boleyn after her band Hellion had a record in the British Music Charts, but was unable to find an American deal. So Boleyn sold her car and musical instruments to fund the initial pressings of compilation albums and eventually full releases by bands. King Kobra (the band founded by Carmine Appice and Mark Free) was an act that was on the label as well.

So the label signed the band to an 2 album deal, but the label offered no tour support. Cerebus played an extensive US tour on their own budget but going to Europe proved impossible as they didn’t have the means, which is a shame, as the majority of their sales were in Germany and Western Europe. After the U.S run of shows, the band and label parted ways.

The band kept writing and releasing, but in a market dominated by gatekeepers, they needed a label and a distributor. Which didn’t come as easy as they thought.

And as the EP releases kept coming, the band kept tweaking their sound, moving from their Iron Maiden/Saxon style to a more Deep Purple, Whitesnake and UFO sound.

Running Out Of Time

Its speed metal and those harmony leads from Andy Huffine and Chris Pennell (RIP) in the solo section sound like they came from a Saxon album.

The vocal lines from Scott Board are like the chainsaw vocals of James Hetfield from the first two Metallica albums, with the Rob Halford banshee wail.

And the double bass drumming from Joby Barker just keeps pummelling along.

A different style of cut, in the hard rock vein with a melodic rock style chorus.

Acoustic arpeggios kick it off with a guitar solo before it explodes into a UFO style cut merging “Lights Out” and “Too Hot To Handle”.

Too Late To Pray

It also starts off with acoustic guitar arpeggios, before it moves into a military style drum beat. Then the harmony guitars kick in, but it’s all part of a long intro, before the main song kicks in with a head banging riff.

And the vocal line is ball tearing.

Rock The House Down

It has the “One Riff To Rule Em All”, which a lot of people would know as “Two Minutes To Midnight” but it goes back all the way to the 70’s.

Catch Me If You Can

It sounds like “Running Out Of Time”, but with no singing, and bass solos which you can actually hear.

It has these “I Still Love You” arpeggios in the intro which I like.

3 thoughts on “The Record Vault – Cerebus”