I had Iron Man, Paranoid, Sweet Leaf, War Pigs and Children of The Grave on various metal and rock compilations, plus Ozzy had given his Sabbath career a decent outing in his solo career. I still rate the Randy Rhoads version of “Children Of The Grave” as THE definitive version of that song.

The ones I spent money on are “Heaven And Hell”, “Volume 4”, “Sabotage”, “Sabbath Bloody Sabbath” and “Reunion”. 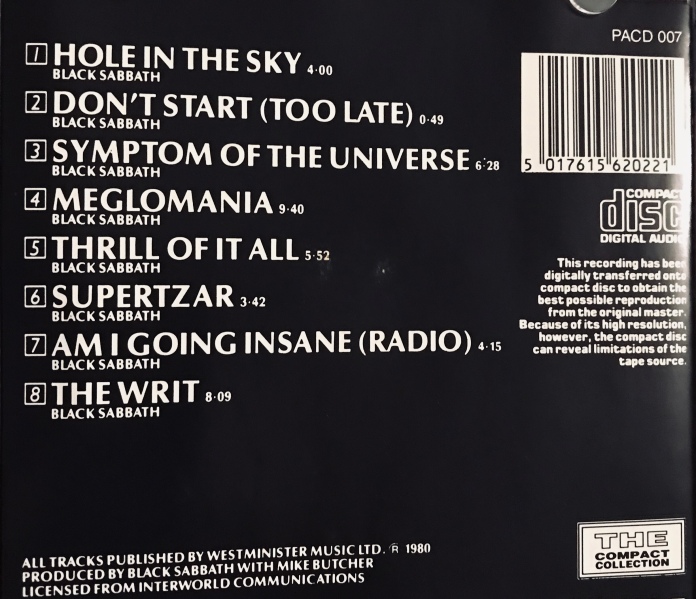 This was my first buy, because I came across a guitar transcription of the song “Symptom Of The Universe” and I wanted to hear how the original version sounded. And I wasn’t prepared for how good the album is.

The stoner rock sludge of “Hole In The Sky” kicks it off and Ozzy is at 10 in his vocal intensity.

And after a little acoustic flamenco doodle, “Symptom Of The Universe” kicks off.

And that Em to B flat riff is brutal like a chainsaw going through the head. Vocally, Ozzy again is at an intensity level of 10, just going for the throat.

That change at the 2 minute mark, gives the song a new dynamic, while the acoustic folk outro elevates this song to legendary status for me.

“Megalomania” from a guitar point of view, has got killer riffs all over it. Poison even used one of the riffs for a song called “Looked What The Cat Dragged In”. It’s the riff that kicks in at 3.23 when the cowbell starts.

“Take my hand, my child of love come step inside my tears, swim the magic ocean, I’ve been crying all these years”… From “Symptom Of The Universe”.

As soon as the riff for the title track “Sabbath Bloody Sabbath” kicked in, I was in head banging mode. It’s powerful and intense in the way Bill Ward smashes those drum skins and then it morphs into that jazzy like Chorus.

For all the narcotics and alcohol, the song writing is top level.

“Fluff” is nothing like fluff. It’s an acoustic piece that just sits nicely between the two opening tracks and the next two big tracks to come in “Sabbra Cadabra” and “Killing Yourself To Live”.

And I like the flow of “Killing Yourself To Live” with its tremolo effect verse riff. And that reference to “While My Guitar Gently Weeps” in the lead break, is nice and subtle.

“Who Are You” has a synth riff that sounds brutal on guitar.

But my favourite on this album is the closer, “Spiral Architect”. I love playing it on the guitar and when you spend a lot of time learning a song, it becomes a part of your life.

The way it morphs from the open string arpeggios into this major key style riff and then into a re-write of the “Sabbath Bloody Sabbath” riff.

And to be honest, I reckon Randy Rhoads was influenced by this song for the “Diary Of A Madman” as well as Bob Daisley for the vocal melody. The Chorus melodies of both songs are pretty similar.

“The people who have crippled you, you want to see them burn”…. From “Sabbath Bloody Sabbath”. 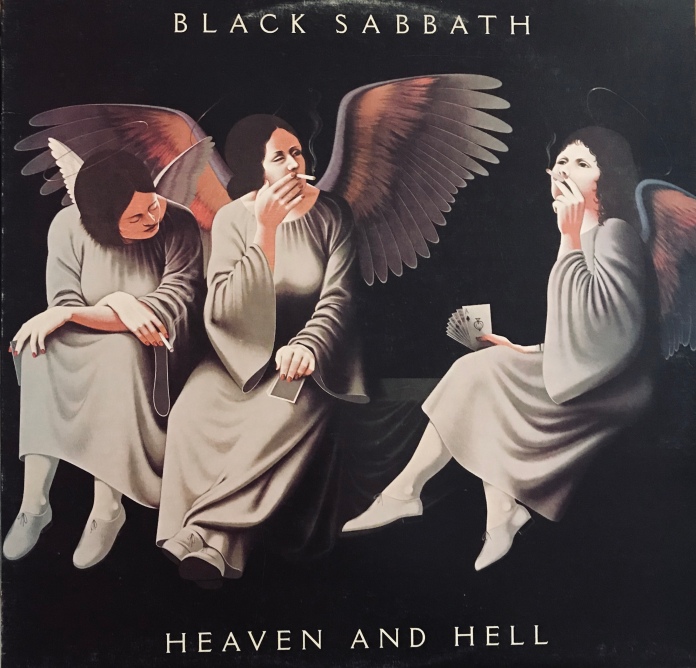 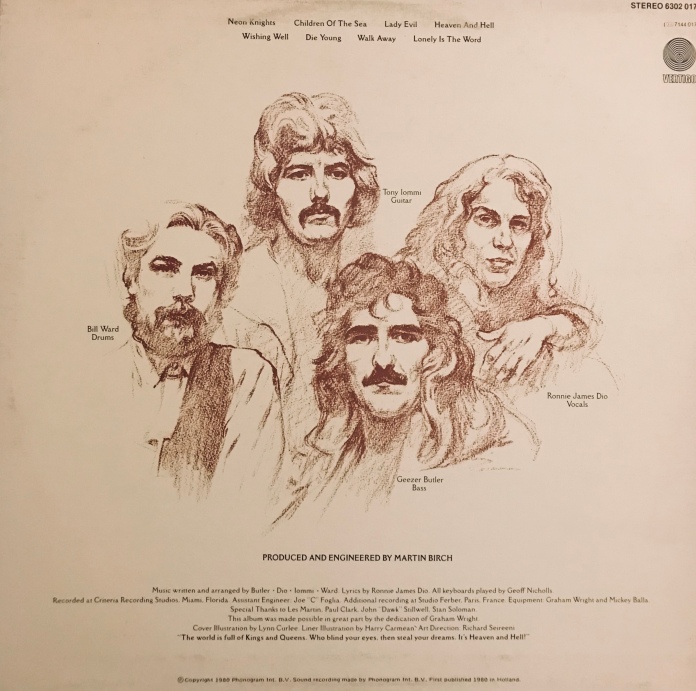 I purchased this album very late. It was actually after “Lock Up The Wolves” from Dio came out in 1990. At that time, I had the cash and my plan was to get stuck into Dio’s past works starting with Rainbow. But, I also came across the Black Sabbath releases.

It’s a massive album and I couldn’t believe I was so late on hearing this. But kids these days have the whole history at their fingertips so they wouldn’t understand the past.

As with all things related to record labels, this project (like the Blizzard Of Ozz) was always meant to be a new band. Instead the world got another Black Sabbath album and an Ozzy solo album.

The first song written by Iommi and Dio for the new band was “Children of the Sea” but the opener “Neon Knights” sets the feel.

Geezer Butler was so set against continuing without Ozzy,  keyboardist Geoff Nicholls was on hand to play bass on those initial sessions. And it was Nicholls who came up with the “Heaven and Hell” bass groove from the jams the band was having, although Butler is credited.

And by the way, “The world is full of kings and queens, who blind your eyes and steal your dreams…..” from HEAVEN AND HELL.

And one more, “the moon is just the sun at night”. 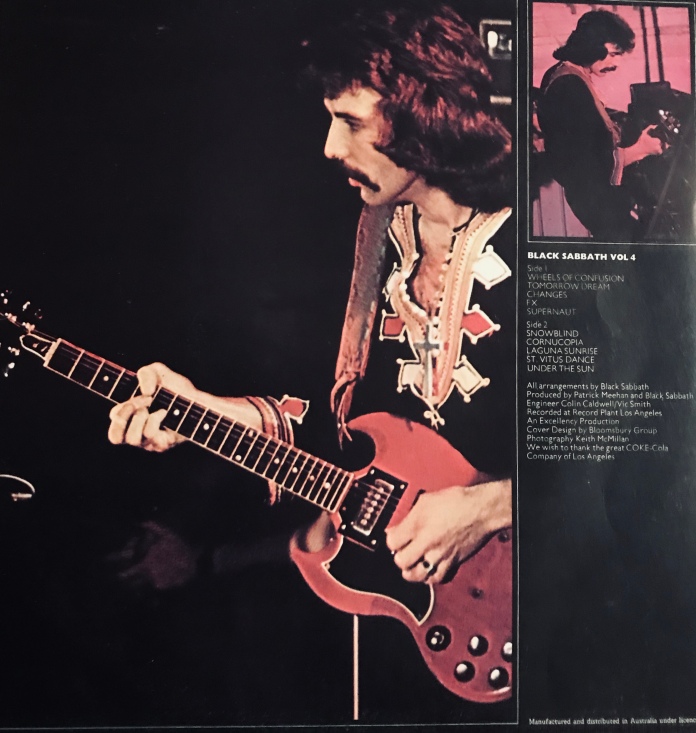 “Wheels Of Confusion” starts the madness and when that Em riff from the 5.20 mark comes in and plays all the way to the end, yep, it’s time to break desks.

“Tomorrows Dream” is loose and jammy, just the way a dream should be. “Changes” came from left field. The first version I heard was Ozzy’s re-interpretation for the “Live and Loud” album. But the original, has this hi-fi feel that I dig.

While “Snownblind” showed me what happens when you spend too much time in a snowy place.

That arpeggiated section during the solo break is a nice change of those simple dynamics between distorted and clean tones. And at 3.30 they bring in this bluesy style riff and Bill Ward sounds like he’s about to break his drum kit. 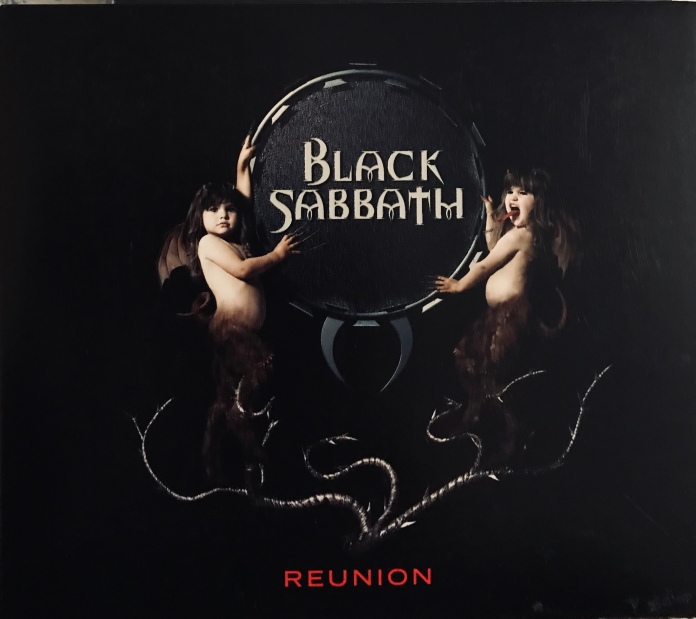 When this came out in 1998, Kiss was already doing the “Psycho Circus” victory lap while Rush never left. So there was no bigger concert ticket than a proper Black Sabbath reunion, apart from a Led Zeppelin reunion.

And they delivered a live performance on a double CD, along with two new studio tracks. While the live songs are all good, it’s the two original tracks I want to talk about.

“Psycho Man” has an outro which rocks, when Ozzy is singing “he’s the angel of death” but I couldn’t shake the feeling that it sounded like a “very unlucky” left over track from “Ozzmosis”. “Selling My Soul” on the other hand, feels like a Sabbath song.

So that is my Sabbath collection.

Blame Ozzy for it being so light, because when you see my Ozzy Record Vault collection, you will go “I get it”.

For me, there was no need to buy every Sabbath album as Ozzy more or less recorded the songs live and released them as a Solo artist.