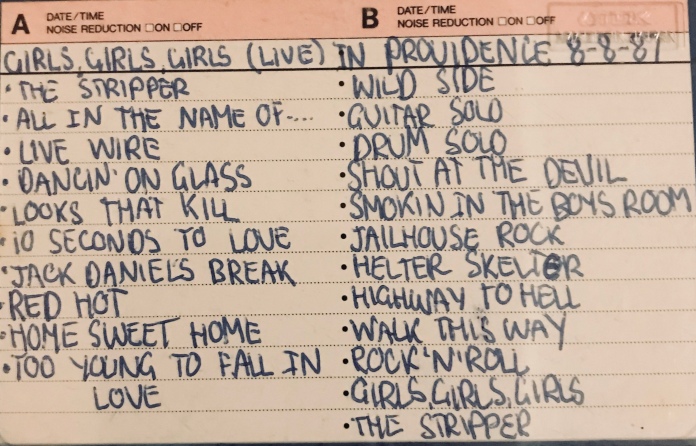 I’ve got the bootleg on LP and I couldn’t find any YouTube clips from this concert, but there is one titled Motley Crue – Full Concert – 10/10/87 – Oakland Coliseum Stadium (OFFICIAL) which has the same set list, starting off with the Dave Rose “Stripper” song as the backing tape, but some songs are edited out for some reason.

And “Dancin On Glass” is one of my favourite tracks from the “Girls” album, so it’s cool to see it in the set list and to hear it get the live treatment.

Because it’s a god damn great song and it works perfectly for the live show, with its sleazy groove and blues influenced vocal melodies. The other songs are more or less part of Motley canon and still part of the set list, and the Jack Daniels break is the guys drinking Jack Daniels, basically an early version of Tommy’s tittie cam.

Also on Tommy Lee, he is a very underrated drummer. He holds down the fort, consistent in his tempo’s and every cymbal crash and every drum fill and every ad lib drum fill is on beat.

There is so much guitar on this tape, from two giants in Nuno Bettencourt and Steve Vai.

Like Steve Vai’s guitar is having a convo with David Lee Roth in “Yankee Rose”. Nuno’s is supporting an harmonica lead in “Little Girls”.

This tape fell into my possession from a girl who dumped her boyfriend. And since this mix tape was created by her now ex-boyfriend, she didn’t want it. Both sides were metal ballads. I didn’t mind side 2 as it had some cool guitar like Whitesnake with “Restless Heart” and “Is This Love”, Bad English, Firehouse, John Waite and Slaughter.

Side 1 from memory had some ballad Bolton songs which was enough for me to overdub. I actually liked Michael Bolton on his first couple of solo albums, because they are good melodic hard rock albums.

I also don’t know what I was thinking when I used the words Metal and Ballads together. It just doesn’t make sense. I should of merged them, Metallica style, to become Metallads.

Actually that’s even worse now, Metal Lads. What is that?

And I added some WASP tracks at the end of the Maiden album, just to fill up the side.

How good is the intro to “Prowler”?

Led Zeppelin – IV
Led Zeppelin – my selection from Remasters (and I don’t know why I selected some of the same songs I had on side 1 courtesy of “IV”). 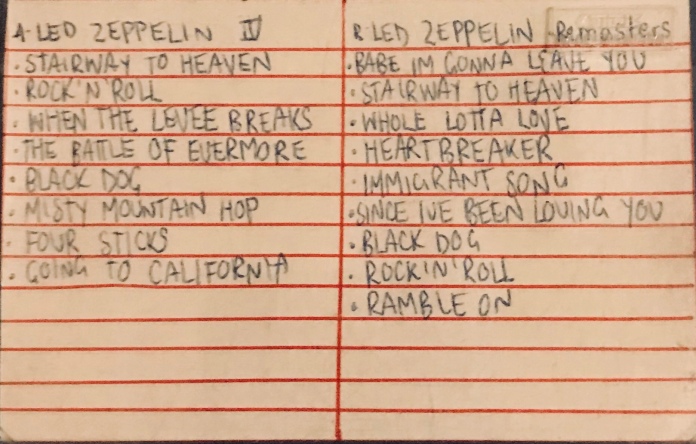 When I was burned out on my 80’s music in the 90’s and I wasn’t really biting the new Seattle sounds as essential listening, Led Zeppelin and hundreds of other 70 acts became my go to sounds.

And I loved the world and the sounds they created because rock music was about trying things. No other artist wrote a song like “Bohemian Rhapsody” or “Kashmir” or “Stairway To Heaven”. Ohh, wait, scratch that last part on “Stairway” as a judge and a jury will decide the Stairway case. The insanity of it all.

And I remember reading the making of “The Wall” and how complicated it was because the band members didn’t speak to each other, and Roger Waters wanted total control and the record label wanted it to have more accessible songs which Pink Floyd refused to do and the record label wanted it out at a certain time, which the band refused to do. And that constant struggle between creating art vs money thrown at the artist continued.

Because the labels were scared to drop an artist who had sales, because there was nothing worse than having an artist you dropped, sell a million records on another label. So they kept em on their label, put up with em and gave in to their demands, because the artist had the power. As Ricky Gervais said in his Golden Globe speech, “he doesn’t care”, the artists had the same motto. They didn’t care, it was all about the sex and the drugs and the sex.

But MTV gave the record labels a lot of power because they created it and controlled it and when music entered the lounge rooms, sales of recorded music went through the roof, which meant a lot of dollars on their profit sheets.

Suddenly, the labels had the power to kill an artist’s career straight away. And Seattle didn’t decimate the hair bands. The record labels did, by signing so many “look a likes” and “sound a likes” that the market reached its saturation point.

One thought on “The Pirate Vault #8”