The little box of cassette tapes keeps bringing back some memories.

The Gunners mix is a weird one, a combination of live tracks from B sides and “Use Your Illusion” tracks, along with “Patience” from the “Lies” EP.

I chucked in “Breaking The Law” from Judas Priest towards the end because the band I was in was covering it, and in the 90’s when we played the song, people thought it was our own song. Totally clueless to the songs origin or we played it that bad, they couldn’t recognize it.

And “So Tired” from Ozzy’s “Bark At The Moon” album is one of the best songs Ozzy has written with just one finger and a piano.

Side 2 has the excellent “Seventh Son of a Seventh Son” album from the mighty Iron Maiden.

I remember sitting down and learning “Moonchild”, “Infinite Dreams”, “Can I Play With Madness”, “Seventh Son Of A Seventh Son” and my favourite track, “The Evil That Men Do”.

Living on the razors edge alright. 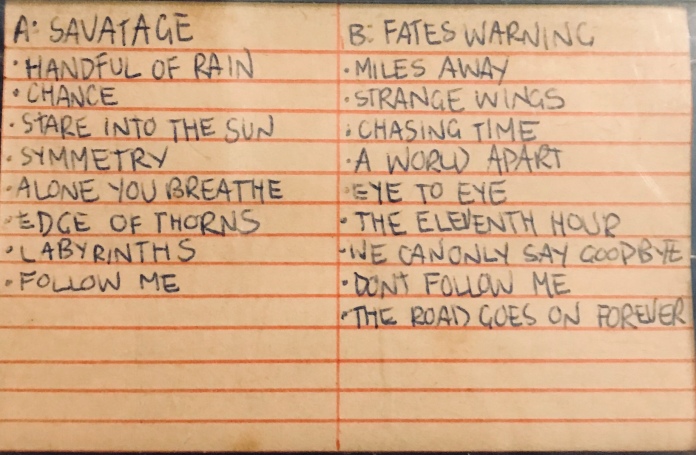 My cousin “Mega” is four years older and at this point in time, he had more money at his disposal and was devouring new music like a sumo having breakfast.

And I had the Savatage albums with Criss Oliva up to “Gutter Ballet” on LP and “Streets: A Rock Opera” on CD, but hadn’t heard “Edge Of Thorns” and then I wasn’t sure what was going to happen after his death with the next album, but upon hearing that Alex Skolnick from Testament was involved, I was interested.

As for Fates Warning, I had the first three albums on LP and Mega was purchasing all the CD’s after that.

So on a visit to his place, I spent some time listening and cherry picking songs to fill up a side over a few albums. I guess Apple was onto something with their iTunes Store.

Guitars From Hell Part I and II

I don’t know why I selected that title for this mix tape.

“Take Me For A Little While”

It’s one of my favourite cuts from the “Coverdale/Page” album, because it could have been a massive radio hit if it was shorter, but these two legends just kept going and the song ended up almost 7 minutes long.

Nuno Bettencourt has some real good guitar moments in this song and it’s here because of it.

“You Don’t Remember , I’ll Never Forget” and “Queen In Love”

I was having a Yngwie Malmsteen moment and these two songs are accessible and Malmsteen plays for the song, with stellar riffing and picking the right moment to break loose.

“Dr Rockter”, “Love Machine” and “Sleepin In The Fire”

WASP aka Blackie Lawless just knew how to satisfy the core. These 3 songs I can put em on, and never once do I think to press skip.

I had overdosed on the Dokken albums from “Tooth N Nail” so I went back to the debut.

“Hiroshima Mon Amour” and “Island In The Sun”

Did I mention I was having a Malmsteen moment?

These are tracks from the excellent and very underrated “Alcatrazz” band before Malmsteen went solo.

Notice the guitar heroes in the list on side 1. Jimmy Page, Nuno Bettencourt, Yngwie Malmsteen, George Lynch and Chris Holmes/Blackie Lawless (bassist who moved to guitar). Maybe the whiskey swilling Holmes didn’t get as much attention, but he could play and he could party. Sort of like the underrated Robin Crosby from Ratt.

“You’re Invited But Your Friend Can’t Come” kicks it off, a cut written by Shaw and Blades for Vince Neil, but the guitar you hear is from Steve Stevens. And the solo break is worthy.

“Reason To Kill” has the excellent Al Pitrelli on guitar. It was released on “Blood And Bullets”, the excellent album from Dee Snider’s “Widowmaker” project.

“Outlaw” is from the pre Motley John Corabi fronted “The Scream” band.

“Devils Toy” is from the excellent “The Almighty” and it can be found on their “Soul Destruction” album.

“Stand Up And Fight” is from MARS, the supergroup project featuring Tony MacAlpine on guitars, Tommy Aldridge on drums, Rob Rock on vocals and Rudy Sarzo on bass.

“To Hell With The Devil” is one of my favourite cuts from the album of the same title and all those harmonies courtesy of Michael Sweet.

“Here I Go” is from “The Screaming Jets” a hard rock band from Australia. This song appears on their “Tear Of Thought” album. Guitarists, Grant Walmsley and Richard Lara really worked well together and nailed their parts, however credit needs to go to the main songsmith in bassist, Paul Woseen, who wrote the majority of songs for the band.

“Midnight/Tornado” is from the Skid Row debut. I always liked this song, but other songs got my attention early on, so I put it on a mix tape to overdose on it.

“Don’t Lie To Me” is another obscure Dokken cut that features some tasty work from George Lynch.

And to close, a Cinderella classic in “Don’t Know What You Got (Until It’s Gone)”.