AC/DC tickets would be snapped up by fans who didn’t even own an AC/DC album. So the next time you hear a label boss or a musician who had a deal pre-Napster say, “sales of recorded music = fans”, call them on their bullshit.

I’ve had mix tapes of my favorites from their Bon Scott and Brian Johnson eras on TDK cassettes. 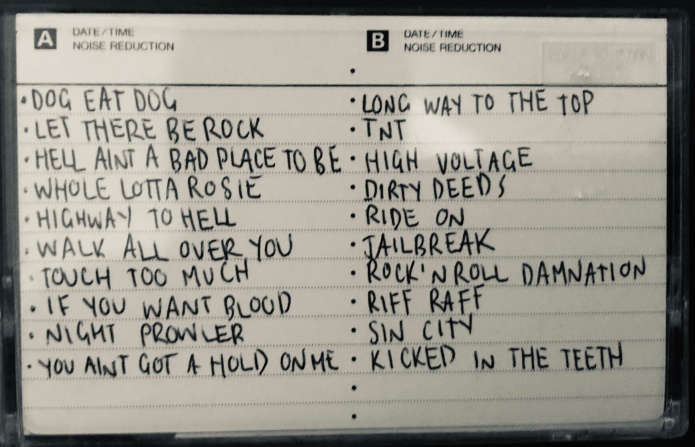 I’ve had full albums dubbed on cassettes and VHS tapes with their video clips. All recorded from friends and relatives and TV.

Flick Of The Switch

Personnel changes happened as well. Simon Wright is in the drummers’ chair but Phil Rudd played on the album, Mutt Lange was also out as Malcolm felt the band was getting over produced and their manager Peter Mensch was also out.

So when the band takes back some control, what do you get?

A live and raw version of AC/DC. There are no classic songs or hits on the album. But there is a lot of groove and swagger. The slower tempo’s make it sound HEAVY. Hell, bands like Corrosion of Conformity built careers off these kinds of grooves. But the songs don’t get played live, so the album remains largely forgotten to the masses.

Here is a review I totally agree with from BuriedOnMars.

And here is another review I agree with from Deke over at Thunder Bay.

Let There Be Rock

I know “Back In Black” is the highest seller in the catalogue, but man, this album and “High Voltage” are victory lap recordings. Look at any set list and you will see these songs on it.

Bon Scott is singing about Ruby and Mary licking that licking stick.

Bon Scott always had a social and political angle in his lyrics.

Dealing with people in the music industry is like signing your life away. If you make it, these business people will then make money of your songs, your image and when all the crowds move on, they leave you in the dumpster to pick up the pieces.

Dog eat dog
Read the news
Someone win
Someone lose

These days, the news is the social media feed. We are surrounded by people with the best holiday shot, the best party shot, the best beach shot, lunch shot and so on. Everyone portrays an image of being a winner. And if someone is watching a winner, it must mean they are a loser.

See the blind man on the street
Lookin’ for somethin’ free
Hear the kind man ask his friend
Hey, what’s in it for me

We are more wealthy today than ever before, but 70% of that wealth is with the top 1%. So while you get people living from pay to pay helping out and volunteering, the ones who have the means to make a difference, do nothing, create their own charity as a tax dodge and make it look like they are doing something.

Let There Be Rock

That riff that kicks it off. It’s speed rock, it’s simple and I love it.

Bon is framing a picture of a time when rock and roll was born and referencing Chuck Berry and his track “Roll Over Beethoven”.

Bon is capturing the essence and excitement of rock and roll when it came to the youth of the 60s.

And there was rock alright. I remember every album I purchased in the 80s had a song title in the list that mentioned rock.

Religion and belief in the Bible as truth is massive all over the world. Bon knew how to frame his lyrics with enough rebellion for it to connect with a generation who more or less had similar devout upbringings.

What I want I take
What I don’t I break
And I don’t want you
With a flick of my knife
I can change your life
There’s nothing you can do
I’m a problem child, yes I am

Scott lived for the moment.

If a current pop artist had the above lines in a Chorus it would be a hit.

Hell Ain’t A Bad Place To Be

Spends my money
Drinks my booze
Stays out every night
But I got to thinkin’
Hey, just a minute
Somethin’ ain’t right

If Bon was a problem child, what about the women in his life, who spent his money and drank his booze.

What hasn’t been said about Rosie, about a whole lotta woman who knows how to rule the bed. But it’s the call and response of the intro riff which hooks me.

For Those About To Rock 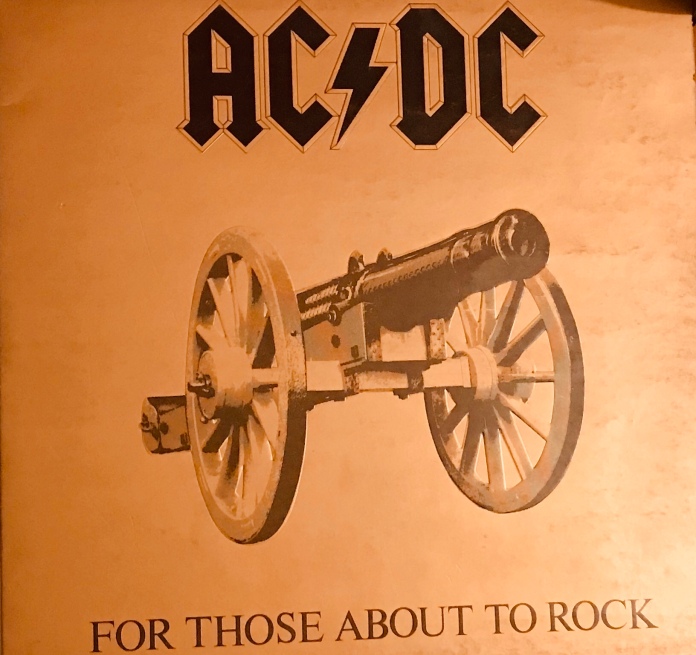 For Those About To Rock (We Salute You)

The way the guitars start it off, man, what can I say. It’s perfect.

Stand up and be counted for what you are about to receive
We are the dealers
We’ll give you everything you need
Hail hail to the good times
Cos rock has got the right of way
We ain’t no legends ain’t no cause
We’re just livin’ for today
For those about to rock, we salute you

And that’s how Rock was, a lifestyle of living for today, going to the show and allowing the music to surround you.

I Put The Finger In You

Again, I love the intro musically. The lyrics about fingers on fire being out of control is whatever, but the music…

It’s got that “Hells Bells” influenced intro. And a verse riff from the chorus of “Sweet Home Alabama”.

I didn’t own the album. A friend of mine had it on CD and I copied it off him.

And when the tour rolled into town, it was a no brainer to go.

They kicked off with a 1-2-3 knockout combo with “Back In Black”, “Shot Down In Flames” and “Thunderstruck”.

For encore, they did “Highway To Hell” and finished off with “For Those About To Rock”.

Blow Up Your Video

“Heatseeker”, the video clip was everywhere on music television, in the same way “Who Made Who” was still doing the rounds and “Sink The Pink” was also doing the rounds, along with “Hells Bells” and “You Shook Me All Night Long”.

It’s one of the main reasons why we didn’t need to own the albums. We felt like we heard enough of em. And music television in the 80’s had the ability to reach a lot of people and as a by product make a lot of money for the labels.

“That’s The Way I Wanna Rock ‘ N’ Roll” was released as a single, however “Heatseeker” was doing a decent job taking all the limelight, this little ditty got ignored.

“Two’s Up” has a super melodic Chorus riff and a tapping guitar solo by Angus. 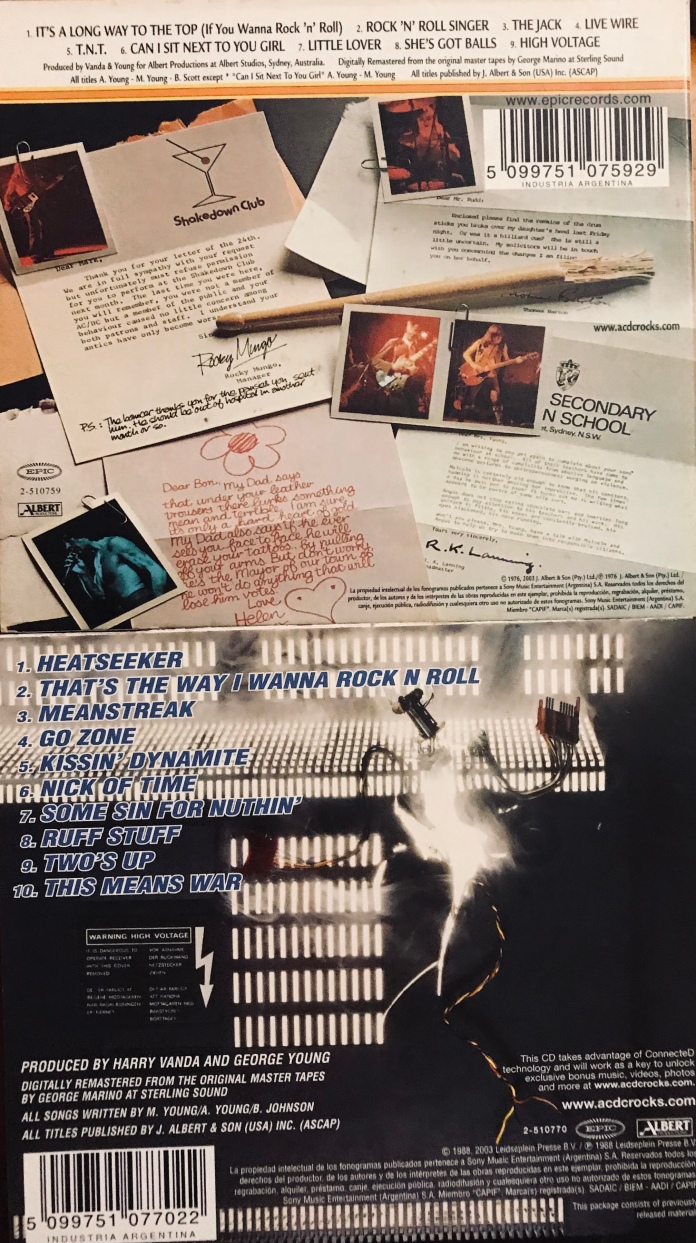 Bon Scott wrote lyrics that resonated with his audience and this album is full of great lines.

Australia is huge. To travel east to west in a plane, it will take 5 hours. By car, a lot longer. AC/DC didn’t just conquer their region, they conquered all of Australia, by playing shows in every state and city. They even played Tasmania, which is a state everyone ignores.

Remember it, and to add that rock and roll is a lifers game.

Getting ripped off and being a musician go hand in hand. There are always people looking to make a buck from the hard work of artists.

It’s the rebellion against authority which hooked people in. Back then, your parents didn’t hang with you. They were your enemy.

Parents always have plans for their children and I’ve seen first hand, how those plans have broken their children, mentally and emotionally. I’m a parent and all I have for my kids is support and guidance if they want it.

Some wanted to be a rock and roll singer once upon a time and when MTV brought the rock starts into the lounge room, then everyone wanted to be one.

These days, kids are gonna be a tech billionaire, or a sell n trade broker. Imagine the lyrics with those words.

It just doesn’t have the same rebellion as rock and roll. In fact, being a broker and a techie is following the status quo and confirming to what the current corporations in power want.

There’s nothing else except the dream. From reading the bios of rock stars it’s a lonely journey in reality. As you ascend the ladder, people who were there at the beginning are replaced by different people with questionable motives.

There are no moral standards in Corporations and Governments. Everyone is on the take. And kids these days are taught by people who just read from a curriculum, and are not interested to go the extra to ensure that what they are teaching is understood. And those curriculums are changed regularly to suit a certain interest group.

Did you know that the RIAA and MPAA lobbied hard to get Copyright and how breaking Copyright is stealing to be taught at primary schools?

Yep they did and not one parent even blinked an eye, as they fired up their uTorrent and kept breaking Copyright.

This is classic Bon, using a deck of cards analogy for a sexually transmitted disease.

Brilliant. Even comedic. How many did she have?

A street alley chant is a great way to start. And when you add the simple Em to G to A riff, it’s perfect.

There ya go folks, get into a band, fuck a lot and play live. 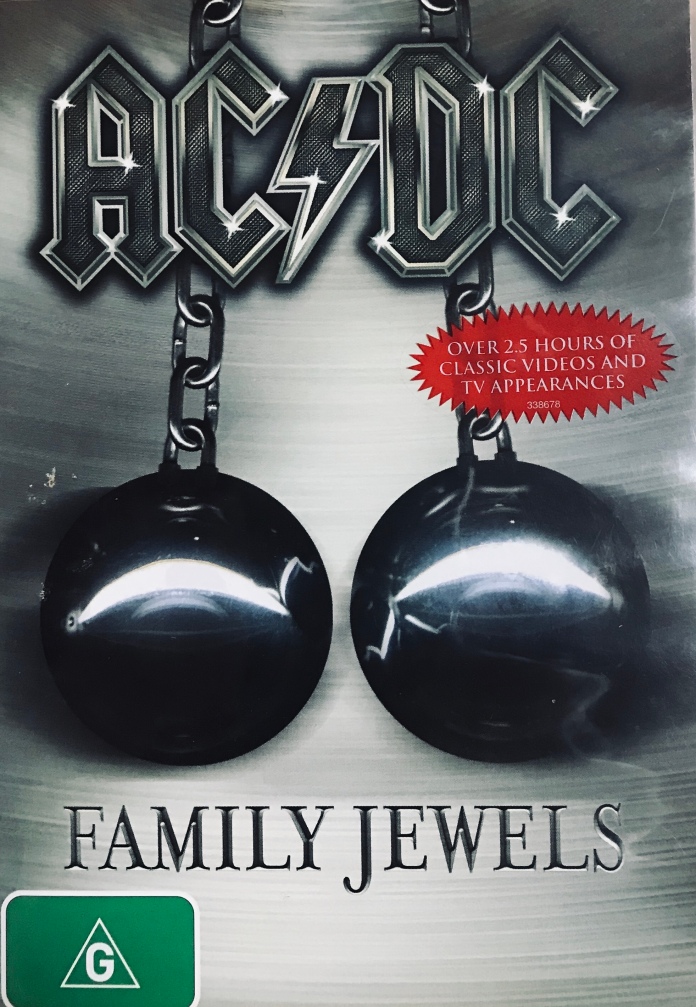 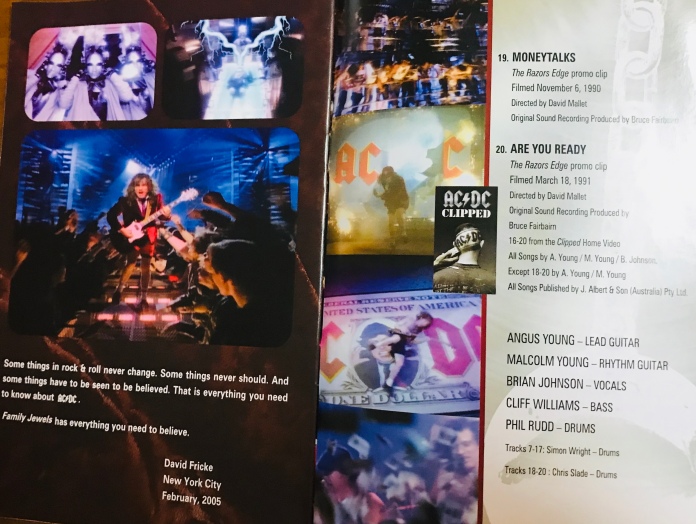 This is a great DVD package, a bonafide best off.

And my “Back In Black” LP and cassette is also missing, suffering the same fate as “Disturbing The Peace” from Alcatrazz and “Permanent Vacation” from Aerosmith.

8 thoughts on “The Record Vault – AC/DC”