The Butterfly Effect are from Brisbane, Australia. Formed in 1999, they dropped their debut EP in 2001.

“Crave” is from their “Begins Here” album released in 2003. The next song “Saved” didn’t appear on any album until their 2016 release, “B Sides, Live and Rarities”. “The Cell” and “Take It Away” appeared on their six song EP, released in 2001. It was “Take It Away” from the EP, which got me interested in the band.

It debuted at No. 2 on the ARIA charts.

You could hear in this album that the band was progressing in their song writing department. You can hear the onus on more melody. Getting older, playing live, building on experiences and relationships all enhance the song writing.

But it wasn’t so smooth making the album.

“I think, as a grown man, I can probably say it would have been the most stressful seven weeks of my life”

Joe Barresi was hired to produce the album. He heard the demoes the band sent and was enthusiastic to work with them. He just finished recording Tool’s “10,000 Days” album and the band flew to LA as soon as a slot came up in Barresi’s calendar.

But the band wasn’t really ready to start recording at this point in time. And Barresi sure let them know it. The band started to not enjoy the process, but the experience with Barresi, showed them gaps in their commitments which they used to realign their goals with their music career.

From the opening one minute instrumental “Imago”, to “Aisles Of White” to “Gone” to “A Slow Descent”, it’s a four punch combo. The ending of “A Slow Descent” is excellent. But the album gets better. “Before They Knew” and “In A Memory” are my favourite cuts on this album. 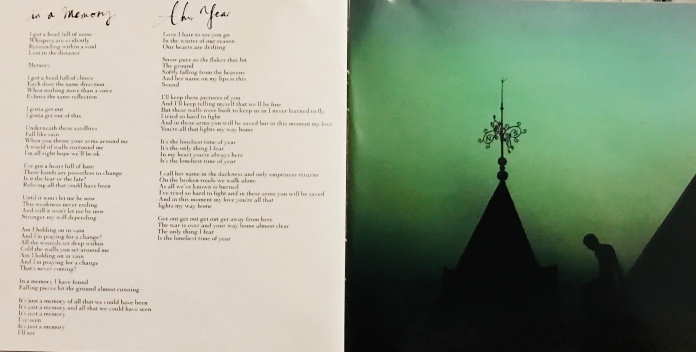 “In A Memory” has this bass riff inspired by Tool as it rumbles along and leads the song. But when you think the song is over at the 3.30 minute mark, it moves into this beautiful section which starts with chords and then arpeggios and a haunting vocal melody. And it’s got an ending as good as “A Slow Descent”. And those endings are pure gold.

The way these words are delivered is haunting, like a dream you’ve just had and you are not sure when you wake up, if it’s a real memory or a dream memory.

As good as “Imago” is, their piece d resistance album is “Final Conversation Of Kings” released in 2008.

I have no photo to share of this album because I gave it and the debut EP to my ex drummer, along with “The Dirt” hardcover book from Motley Crue, a  Rush “Live in Rio” DVD and a Coheed and Cambria live DVD. I should have gotten my stuff back first, before I booted him.

And speaking of band members not getting on, The Butterfly Effect had some issues between founding guitarist Kurt Goedhart and lead vocalist Clint Boge. So it was no surprise that the band members went their separate ways, until a few years ago, when they released a new song and announced a tour around Oz.

5 thoughts on “The Record Vault – The Butterfly Effect”