We had a road trip to Melbourne over the Easter and ANZAC week here in Oz. My kids were doing the music selections via Spotify. A song from this band, a song from that album from another band and on and on they went, cherry picking their favorites.

“Why don’t you listen to a whole album?”, I asked them.

“I don’t know which one”, my eldest replied.

“Let’s start with “Slippery When Wet” from Bon Jovi”. At this point in time, my kids have been exposed to only three songs from this album. I will let you guess with three they are.

The distorted keyboard chords of “Let It Rock” filled the car and when the “woh oh oh” vocals kick in, with the whole band, I got a feeling of being young again and being slammed by knockout punch after knockout punch with each song.

My son asked me “What happened to Jovi?”.

“He got rich” was my answer.

After the last chords of “Wild In The Streets” came crashing down, I said to him to queue up “5150” from Van Halen. I explained the back story of David Lee Roth leaving, and how all eyes were on this new version of the band.

“Hello, baby” screams Sammy Hagar as the AC/DC steroid groove of “Good Enough” kicks in, for Sammy Hagar to use the analogy that a fine women is like a good piece of prime grade beef.

And while the keyboard songs dominated the pop charts, “5150” is a hard rocking album with “Good Enough”, “Get Up”, “Summer Nights”, “Best Of Both Worlds” and “5150” bringing the brown sound to the party.

In relation to my kids, who have grown up with cherry picked favorites via algorithms, the album listening looked like it was proving to be an enlightening experience so far. And from a Van Halen point of view, only “Dreams” from this album had been heard by my kids.

“A black cat moans while he’s burning with the fever”, kicks off our road trip appreciation of the Whitesnake “1987” album.

This album is as heavy as rock could get. Each song, even the ballads are littered with unbelievable guitar work from John Sykes, a rhythm section as tight as a “G string tuned to A” from Neil Murray and Aynsley Dunbar and of course David Coverdale is being pushed to the limits vocally.

At this point in time, my kids had only been exposed to “Here I Go Again” and “Is This Love” via the Spotify algorithms.

Today they got “Crying In The Rain”, “Bad Boys”, “Still Of The Night”, “Give Me All Your Love Tonight”, “Children Of The Night”, “Straight For The Heart” and “Don’t Turn Away”, along with the bonus tracks “Looking For Love” and “You’re Gonna Break My Heart Again”.

My son said we should play a Def Leppard album and “Hysteria” was selected. We both agreed the album has two songs too many on it, but there is no denying the power of the big songs.

In relation to exposure, “Animal”, “Pour Some Sugar On Me” and “Hysteria” are the songs they knew, but know they have added “Woman”, “Rocket”, “Gods Of War”, “Love Bites” and “Armageddon It” to their list.

For those people who grew up in the 80s, it’s weird to think that there is a whole generation born in the two thousands who don’t know the other Def Leppard songs apart from the hits the Spotify algorithms bring back.

We have a 17 year old male. Unconscious. Possible O.D. Patient is not breathing at this time. We are presently putting on the mask

And with that, the down tuned D note riff kicks off “Dr Feelgood”. The only songs they really knew from this album is the title track and “Kick Start My Heart” because they play em a lot, plus they spent time learning the riffs to “Kick Start”.

By the time “Don’t Go Away Mad” and “Time For Change” played through, we were ready for a change.

And that change came with Skid Row’s “Slave To The Grind” album. I’ve exposed the boys to Skid Row more than the other bands for some reason. Maybe because the ballads on this album are excellent. “Quicksand Jesus” and “Wasted Time” are still in my playlists. “In My Darkened Room” has a chorus melody which is addictive for a serious subject. They are also learning “Youth Gone Wild” on the guitar.

“Monkey Business” kicks off the album with a cool groove, while “Slave To The Grind” brings the thrash. My son worked out that he could sing “he’s the one they call Dr Feelgood, he’s the one that makes you feel alright” to the intro riff of “The Threat”. “Quicksand Jesus” shows some great vocal chops from Sebastian Bach, “Psycho Love” is too repetitive and on Spotify “Get The Fuck Out” is replaced by “Beggars Day”. “Livin On A Chain Gang” and “Creepshow” finish off the listening experience as we pull into our driveway.

And in the end, when I asked them if there was something they got out of hearing the full albums, it wasn’t the answer I expected. The extra album songs they heard didn’t change their opinion of what they needed to save. They even fell asleep to the Whitesnake’s album.

The human taste for music favors songs which sound similar to previous songs with just a little variation. And then, when we find a song we like, we repeat it over and over again.

It’s been proven in research and a whole chapter is devoted to it in the book “Hitmakers” by Derek Thompson.

And when you have the whole history of music at your fingertips, streaming services by default creates a new class of music fans by exposing these fans to big songs selected by their algorithms which all sound similar with little variation. And as a by product, this generation doesn’t like to hear songs which are different. 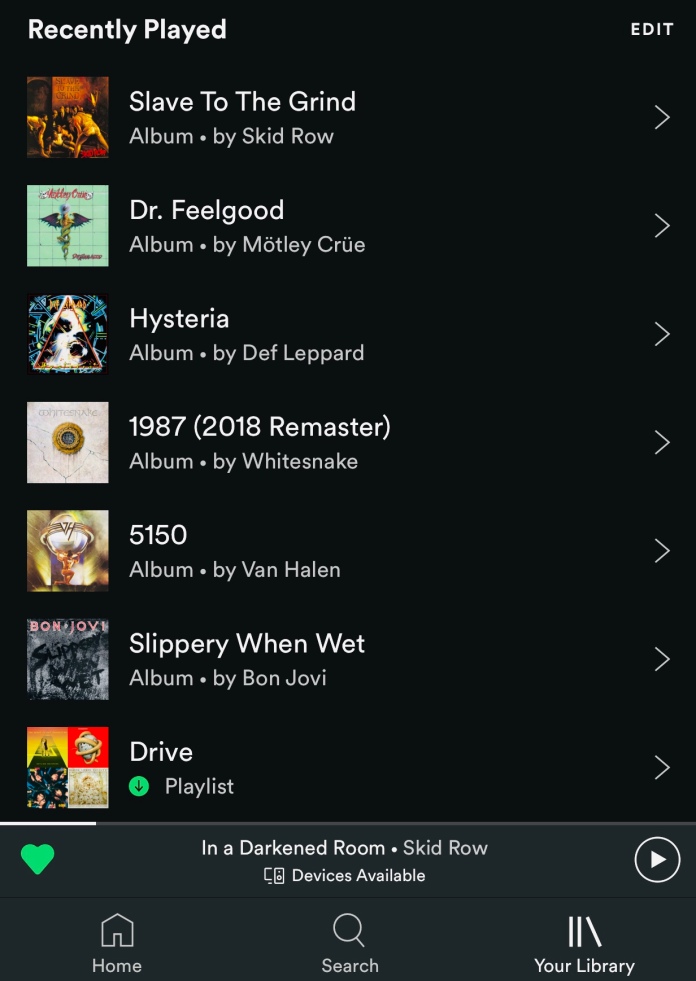